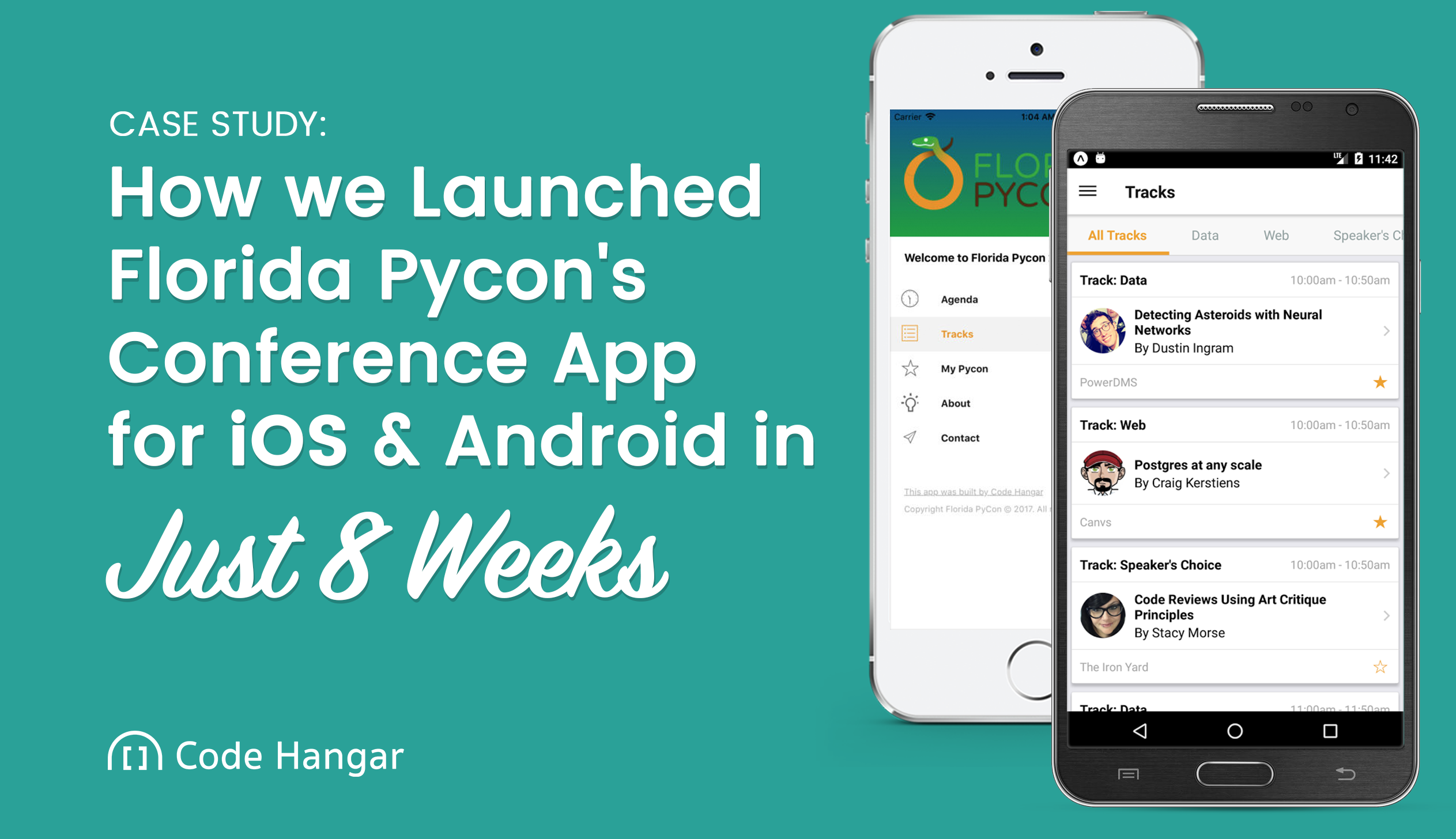 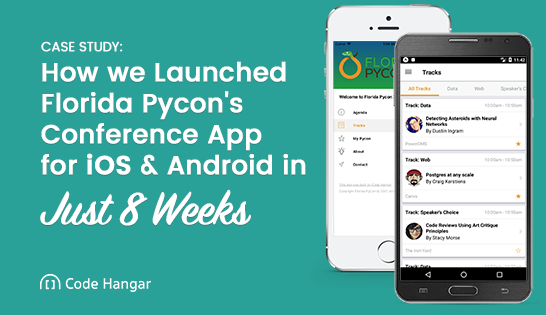 In October 2017, the first-ever Florida PyCon Conference was hosted in Orlando, FL. With 4 tracks, 20 speakers, and about 200 attendees Florida’s first and only regional Python language conference was a smashing success.

Being a multi-track conference, FL PyCon organizers realized as conference day approached that it would be super helpful if attendees could easily find out which talks were happening when and where. While the full Florida PyCon schedule was posted on the FLPY website, experienced event organizers know that you can never rely on stable WiFi access at conferences and the PyCon organizers wanted to make certain that attendees could access the information they were looking for. In addition, they thought it would be great if attendees could build their own personalized FL PyCon schedule and take notes on the talks they attended.

For these reasons, FL PyCon Organizers asked Code Hangar if they could build an app that attendees could use to access the conference agenda and cache it for offline use in the case of poor internet. We were happy to donate our design and development services for the cause.

We decided to build these apps using React Native so that we could maintain a single code base and deploy to both iOS and Android app stores.

Within a few days we outlined the user flow for the MVP and got it approved by organizers. 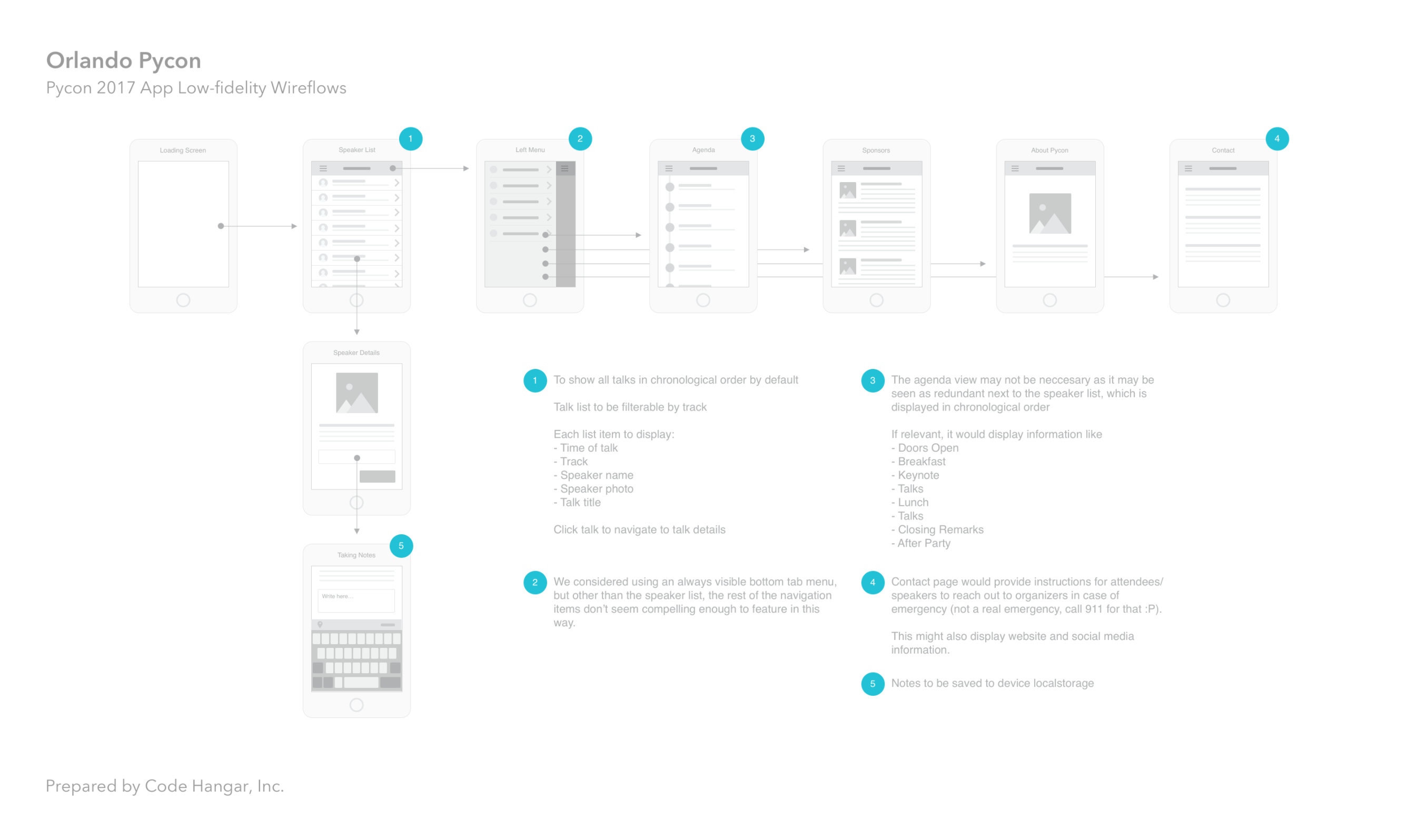 We quickly translated these flows into high fidelity layouts based around the Native Base UI Kit for React Native. This saved us a lot of design time and reduced most unknowns around layout development feasability. 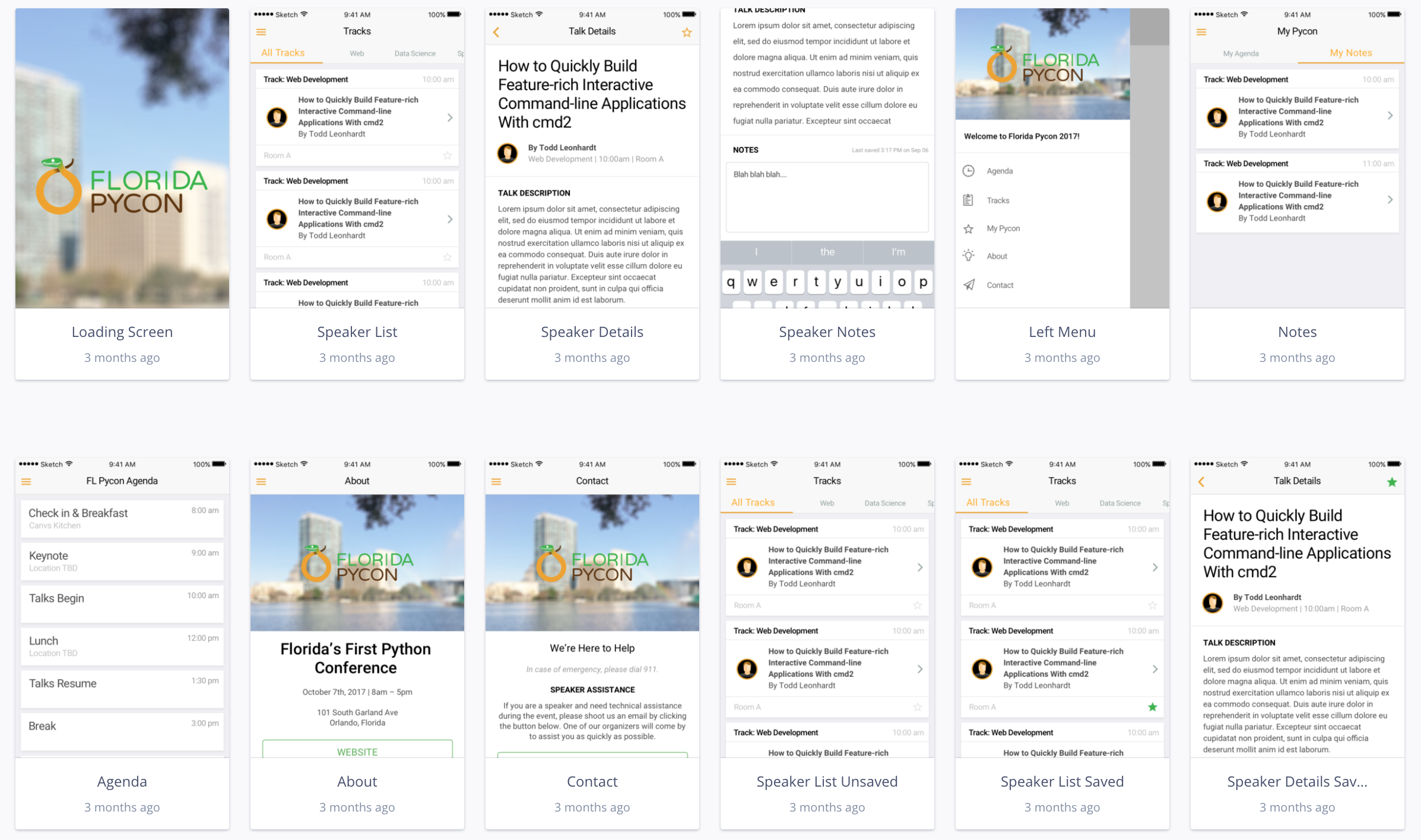 As mentioned above, we decided to build this project using React Native so that we could easily deploy to both iOS and Android while maintaining a single code base, and because we have been building web applications using React since we began our company in 2015 so it just made sense.

A bonus that came with using a tool called Expo for React Native, is that we were able to push UI updates to both platforms without needing to go through the app store update submission process. This meant that we could remain flexible and push out updates on the day of the conference if needed without requiring users to manually update the app.

After the conference we checked the download numbers for iOS and Android. We had about 200 downloads, indicating that nearly every Florida PyCon attendee downloaded the app. Conference organizers were extremely pleased with the outcome, sharing their excitement and gratitude on Twitter.

We are ssssso in love with the FLPY App made by our friends @codehangar. Be sure to download it to plan your FLPY experience! pic.twitter.com/yFfKo1PBjd

Community tech events hold a special place in our hearts here at Code Hangar and we are so honored to have had the opportunity to contribute to make Florida PyCon a success.

Download the Florida PyCon app for iOS and Android to see an example of what we could build for you.

Ready to delight your users with an amazing app?

Book a free consultation with us and see what we can build for you.